Our Lady of Kazan is a Russian icon that was found in the burnt ruins of the city of Kazan in 1579. Mary, the mother of God in Christian tradition, appeared three times to a small child, providing instructions on where to look for the icon. Over the next four hundred years, Our Lady of Kazan would be used by various military leaders to procure divine favor for the Russian army. In the early twentieth century, two copies of the icon were lost, and one was eventually returned by the Roman Catholic Church to the Russian Orthodox Church in 2004.

I thought that your discussion of the Icon's current role in Russian religious and national identity was a strong point in light of the icon's history. I think that it speaks a great deal that one of the holiest icons in the Russian Orthodox Church came from Kazan, right after the Muslim state there was conquered. The fact that it has historically served as a symbol of victory but also was held by foreigners for so long might also explain some of the nationalist concern over it. One point that might be worth noting is that the Kazan Cathedral in Moscow was torn down by Stalin in the 1930s as part of his reshaping of Red Square. The fact that the cathedral has been rebuilt probably accompanies the feeling of Orthodox revival that this icon's return brings.

Your analysis of the Lady of Kazan reminds me of the role that religion has played in Russian history throughout time. I appreciate and affirm the way that you have incorporated Orthodoxy into your object biography -- very great job. I'm interested to hear more. Your analysis: much Kazan, very religion, Russia is very wow.

I thought you made an interesting point that Our Lady of Kazan was not only important as a symbol of religious observance but also as a marker of government power and its relationship to religion.

In a way, the story of Our Lady of Kazan reminds me of the biography of the Faberge eggs, of religious importance, but also of material significance domestically and internationally. Like Our Lady of Kazan, the meanings associated with it are always religious but also cultural and having to do with status and wealth. Also as in the case of the Faberge eggs, Our Lady of Kazan was copied so much that it was sometimes impossible to tell which was the real and which was the fake version. It seems that religious symbolic objects take on a life beyond worship, to travel through cultural waves and accompany historic events, such as wars and military victories which you noted, as they take place. Throught it all, the one unifying meaning is the religious one. 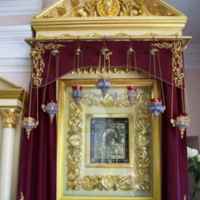 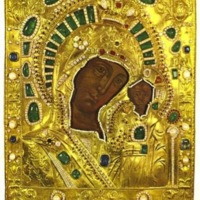 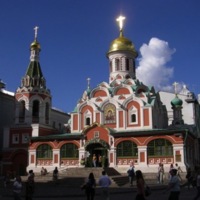 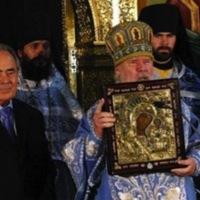 Nancy O'Neil, “Our Lady of Kazan,” Russia in Global Perspective, accessed May 21, 2022, https://russiaglobal.omeka.fas.harvard.edu/items/show/55.