The figure of False Dmitrii I is, possibly, among the greatest mysteries of Russian history. His story is inherently related to the history of Russian-Polish struggle. False Dmitrii I, a pretender, who claimed to be the son of Ivan IV the Terrible, was, according to some versions, the former monk Grigorii Otrep'iev, according to others - a Polish peasant. It has been proven that False Dmitrii spent a long time living in Poland, and was married to the Polish Marina Mnishek. With the help of the latter's father, False Dmitrii gathered an army and, in 1605, established his short rule as the Russian Tsar. He was killed by the troops of Vasilii Shuiskii in May 1606.

The Neatline represents an approximate trajectory of Lzhedmitrii's victorious campaign through Oster, Moravsk, Tchernigov,Novgorod Severskii, and Tula, to Moscow, which he triumphantly entered on June, 20, 1605. 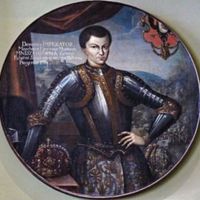