The Cap of Monomakh occupies a place of legend in Russian culture. Supposedly a gift from a Byzantine emperor, or basileus, to Vladimir I, the cap signifies Russia’s shared heritage with Byzantium and with Kievan Rus’. However, the basileus who is said to have gifted the cap to Vladimir lived close to one hundred years before him (Shields Kollman, 39). The legend of the Cap of Monomakh was popularized by Macarius, a Metrpolitan of Moscow and all Russia at the time when the court was shifting away from Mongol influences are more toward Byzantium (Crummey, 137). This legend had real political consequences for the first tsars. Joasaph II, Patriarch of Constantinople, viewed the Cap of Monomakh as the legitimizing factor of Ivan IV’s status as tsar (Ostrowski, 176). Since Ivan IV, the cap has been an important symbol for Russia’s rulers and was used in coronation ceremonies until 1682 (Shields Kollman, 39). Today, the Cap of Monomakh remains to be an important cultural object, and is displayed in Moscow’s Kremlin. 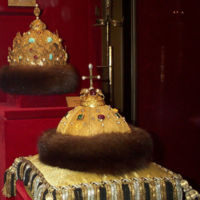