Black Square was created in 1915 by Kasimir Malevich as a “total eclipse” of objective forms – a proclamation of Suprematism, a new artistic movement that eschewed depiction of objective forms in favor of working with cosmic space – an aesthetic philosophy decades ahead of Western artists. The movement was at first well-received by the Soviets – early communists were seeking to build a new way of life, including new art forms – but eventually, such radicalism was cast aside in favor of totalitarianism and Socialist realism, and Malevich’s works were confiscated and put in storage, where they would remain until prerestroika.

"The contents of this site, including all images and text, are for personal, educational, non-commercial use only. The contents of this site may not be reproduced, in whole or in part, in any form without the written permission of the State Hermitage Museum. Images on this web site have been invisibly watermarked; any attempt to remove the watermarks from these images is expressly forbidden."

I agree with both of the comments previous to this, in the sense of the strangeness and anti-establishment nature of this painting. I'm fascinated at how its perception was received at the time and has been interpreted since in terms of "Russianness" and cultural productions as they changed and have been reapprorpriated since before the Soviet era and beyond.

What a strange and fascinating painting. It seems a stretch for me to imagine that a black canvas can express the elevation of feeling over reason: as a gif on my screen the black square seems deeply unfeeling. I wonder to what extent the experience of viewing the painting is significant in understanding this ideology. Or, on the flip side, to what extent does the historical significance lie in the idea of the painting - such a deep reaction to Tsarist opulence - and the way the Soviets interpreted and reinterpreted it. 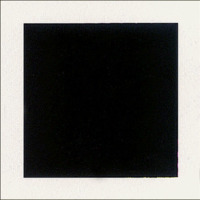