The Amur region grew in importance for Russia during the 1850s. Count Nikolas Muravyov-Amursky led expeditions into the region during the first part of the decade, and during the Crimean War of 1853-1856, the Russian presence in the Amur region was expanded significantly. The Amur River became an important waterway for the Russian military as gateway to the Pacific, and several military outposts were built. With the increased settlement, the region was virtually controlled by Russia. China was unable to respond militarily to the challenge. While Russia was establishing outposts and assuming control of the nearby maritime region, China was taking part in a number of devastating conflicts. The Taiping Rebellion of 1850-1864, which wiped out a large number of Chinese citizens, coupled with the Second Anglo-Chinese War of 1856-1860, provided Russia with the opportunity to gain new territory in the frontier along the border.

The Treaty of Aigun, named after the Chinese town in which it was signed, was concluded in May 1858. The signers were the Russian Count Muravyov-Amursky and the Manchu official Yishan. As part of the treaty, Russia received all land north of the Amur River. Another large part of land to the east of the Ussuri River was also given to Russia. The Treaty of Aigun amounted to an estimated two million miles of new territory for Russia. In addition to territory, Russia gained more control over regional trade and near exclusivity in the use of the Amur, Ussuri, and Sungari Rivers. Two years later, the terms of the Treaty of Aigun would be confirmed in the Treaty of Beijing, which established the Ussuri River as the border between Russia and China. Despite the Treaty of Aigun and the Treaty of Beijing, the border between Russia and China was not agreed upon in manner precise enough as to prevent future conflict. China was fully aware that it had been forced into the Treaty of Aigun, and border disputes continued into the 20th century.

Count Nikolas Muravyov-Amursky of the Russian Empire and Yishan, official of the Qing Dynasty.

Copy the code below into your web page 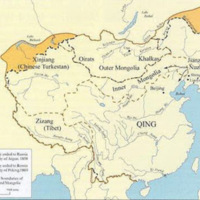