Black bread was, since time immemorial, a ubiquitous Russian food. Born out of climactic and economic necessity, black bread has been credited with giving the Russian peasantry the physical strength necessary to crush Napoleonic France, but also blamed for separation the Western and Eastern Christian communions. It was the abundance or shortage of black bread that caused or ended famines. However, with globalization, white bread became cheaper than black bread. While black bread is well known outside of Russia, consumption of black bread in Russia is greatly reduced.

This file is licensed under the Creative Commons Attribution-Share Alike 3.0 Unported license.
You are free:
to share – to copy, distribute and transmit the work
to remix – to adapt the work
Under the following conditions:
attribution – You must attribute the work in the manner specified by the author or licensor (but not in any way that suggests that they endorse you or your use of the work).
share alike – If you alter, transform, or build upon this work, you may distribute the resulting work only under the same or similar license to this one. Permission is granted to copy, distribute and/or modify this document under the terms of the GNU Free Documentation License, Version 1.2 or any later version published by the Free Software Foundation; with no Invariant Sections, no Front-Cover Texts, and no Back-Cover Texts. A copy of the license is included in the section entitled GNU Free Documentation License. You may select the license of your choice.

I was struck by the image of the choice between religious unity and rye bread. As a huge fan of hearty rye bread, I am sad to see that it has lost some prominence due to globalization. I was also intrigued by climate change warming the Volga region and making wheat production more favorable.

Similarly to Nancy and Michael, I also had no idea that black bread had such a important role in the east vs. west split of the church.  Overall, I thought that black bread is an excellent example of how Russians’ taste have changed over time. In the 18th and 19th centuries Russians and Russian soldiers complained when they were forced to switch from black to white bread. Now, when people have choice, black bread represents only 30% of bread consumption. To me, this represents the modernization and, really, the westernization of Russian culture and tastes. As I fan of black bread, those 70% really are missing out!

Like Nancy, I had no idea that bread choice had played such a large role in the continuing of Rome-Byzantine split. It is incredible to think that religion took a second seat to bread preference. Though, it does match other Russian history in not liking being told what to do. 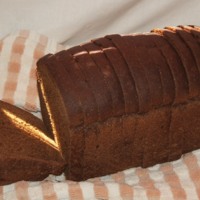