The preserved body of Vladimir Lenin.

The appropriation of orthodox elements shows how, contrary to popular belief in the West that communism in Russia came as if from nowhere and that the Soviet Union was by extension a radical state whose values then posed a serious ideological threat, the Soviet Union borrowed greatly from the Russian Empire that preceded it.

I thought this was a particularly interesting object in that it nicely balanced the sheer emotional effects of having a physical body embalmed and displayed, along with the more practical political consequences that this displayed body implies. Also, tying this in with the present Ukrainian crisis really illuminated the contemporary stakes of this object.

I found this essay to be very interesting! I liked how you mentioned the anti-Chirstian aspects of Lenin's preservation, and the religious significance of Lenin in an antheistic state. I also liked all of the jokes that you included. Very funny!

Isn't there some doubt as to whether that's actually Lenin's body, or just some waxworks? I think another part of the Soviet story is the willingness to deceive the people into believing that Lenin's will for society was still being done and that Lenin was still watching over them, perhaps even to the extent of fabricating his alleged body.

Yeah, and honestly it looked pretty waxy to me when I saw it. I would have mentioned that but for space concerns. Howerver, the biography of one of the embalmers is pretty defensive on the point of it being real, and the author himself also criticizes the Soviet regime as well (so it's not like he's defending the Soviets).

No one's said it, so I feel like I have to. The preservation and idolization of Lenin's body is creepy, seriously creepy. Just reading this gives me the heebie-jeebies... and perhaps that is the point. What is the purpose of a secular relic? It seems like this cult of personality steps into a spiritual vaccuum, but also that it is deeply unspiritual in its rejection of traditional burial rituals. And while worshipping at Lenin's feet seems to have given people something bigger to believe in, it also seems that like a powerful reminder of our own mortality and a rejection of the afterlife. Maybe that is part of why it is so unsettling: not simply because it is a preserved body, but because it seems to simultaneously reject and reaffirm the value of religion. 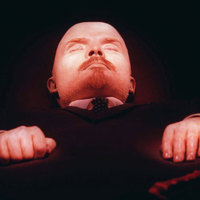