The Museum of Russian Art

I thought this was a particularly interesting example of Russian cultural objects that have been carefully packaged and exported (to be subsequently fettishized and consumed by internatinonal opinion. This story reminded me of our discussion of the Faberge Eggs in today's class (minus the econmic emphasis).

I was really interested by the way you framed these seemingly "old Russian" objects in the concept of the "invented tradition." The biography raises the important question of how the Soviet Union managed to pick and choose aspects of "Russianness" that were compatible with Communism's ideal of a non-religious, non-national society. My impression is that Stalin was much less interested with the internationalism of Communism, and his encouragement of these crafts as "Russian folk arts" might be a good way of proving that. Also, even today the matryoshkas have a fluid cultural identity. When I was at a Moscow flea market, you could find all kinds of matryoshkas with political themes (the last 100 years of Russian leaders, for instance) or even American sports teams for tourists (I bought a set of matroyshka dolls featuring the 2008 University of Georgia football team).

I thought the commentary on how matryoshka dolls were constructed as symbol of Russian culture on what was actually a "borrowed canvas" was illuminating. I loved the way you worded this, because I think it really highlights how something that we think of as so superficially symbolic of Russian culture actually has an extremely complex history.

I love the way you parallel Russian history with the construction of the Matryoshka doll, as both having a overarching mother figure and yet containing many components within. Your insight that the production of the Matryoshka doll provided a kind of cultural, traditional grounding upon which Russia could change, transform and modernize is such an interesting way to understand Russianness over time. 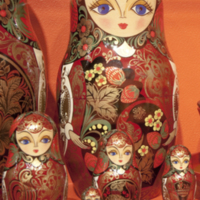 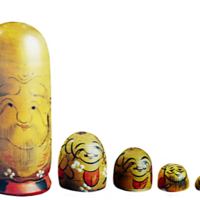 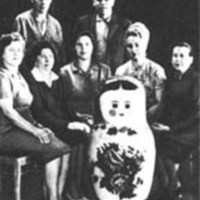 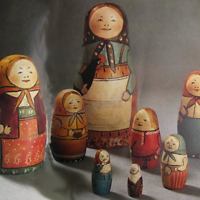 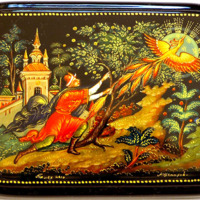