Great article but I think that it doesn't give the Lada enough credit. Ladas were not necessarily well-built, but their components were very robust and could take a lot of stress, and the car's mechanics were simple, allowing cheap and easy repairs. I was also surprised that the car's longevity wasn't mentioned -- the fact that variants of this car were built (and were consistent best sellers) until 2012 speaks to the suitability of the lada for russian roads.

This piece was an interesting look at an automobile as an example of soviet consumption patters. I dont know if you saw this in your research, but I think the British version of Top Gear did an episode on soviet cars and may have included the Lada.

I thought this article was a great overview of the cultural and socio-economic ties related to the Lada, and I thought this article did an especially good job of intimating some of the more curious economic lessons that can be learned from the production and consumption of this object.  Specifically, I think the extended and often-delayed process of buying and procuring this object to reflect so much about the reality of Russia at the time.  This reflects a lot of macro and micro lessons about the Russian economic-consumer interaction at the time. 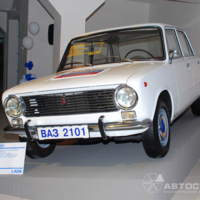