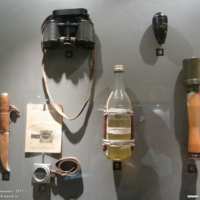 From the Spanish Civil War to contemporary video games, the Molotov Cocktail has developed layered meanings throughout military, political, and cultural histories. From the homemade bomb’s first inception in the Spanish Civil War, Molotov Cocktail has taken a multiple trajectories as a physical object of anti-soviet, guerilla warfare, and a cultural symbol of volatility and resistance. In both its military and pop forms, the contemporary Molotov cocktail is an internationally recognized object, one that hails a unique Russian history.

As a material object, a Molotov cocktail is simply a homemade, bottle-based, petrol bomb. The cocktail comes in three main forms—“classic,” “sticky,” and “smoky.” In the “classic” cocktail, a glass bottle is halfway filled with gasoline. The gasoline is kept inside by a piece of cloth that has been soaked in flammable material (usually diesel or kerosene) and stuffed into the neck of the bottle. The tip of the wick is then set on fire, and thrown at the object to be destroyed (traditionally, a tank). A “sticky” cocktail is essentially the same structure, but with a different chemical composition (typically, a liquid mixture of FMX foam mixed in with the gasoline), meant to thicken the gasoline. This thicker gasoline core creates a heavy, black smoke that “sticks” to the target to be destroyed. Creating an opaque black smoke, the “smoky” Molotov cocktail is ideal for blocking the view of tanks. The “smoky” cocktail composition contains a mixture of gasoline and dish soap. Not powerful enough to destroy an entire armored tank, an effective Molotov cocktail instead creates a hot and smoky environment inside of the tank. Ideally, this forces the crew out of the stuffy, oxygen-deprived tank. A successful cocktail can alternatively block the tank’s sight, thus deeming the tank useless for intensive battle.[i]

Before given the name “Molotov Cocktail,” this bottle-bomb was first used in the Spanish Civil War of 1936-39. After its inception in WWI and before WWII, tank warfare was at its peak in this time. Guerilla Spanish National forces used these alcohol, hand bombs to fight state-of-the-art, 32-ton Soviet tanks, delivering supplies and fighting for the Loyalist side. In September 1959, Francisco Franco’s Fascist army used these petrol bombs in an unsuccessful assault on the Loyalist camp in Toledo. Though the attack itself was unsuccessful, the homemade bombs used by Franco’s Nationalist forces were unexpectedly effective against the seemingly impenetrable Soviet tanks. From thereon out, both sides of the war used these petrol-soaked bottle bombs.[ii]

Though the Molotov cocktail was used in against Spanish forces in the Spanish Civil War, it wasn’t until the Finnish-Russo Winter War of 1939 that the alcohol bomb took center stage and received its name “Molotov Cocktail.” During the war, Soviet air forces actively bombed the Finnish landscape. Vyacheslav Molotos, the current Soviet People’s Commissar Foreign Affairs, denied all reports of this bombing, instead insisting that Soviet airplanes were delivering food to the famished Finnish population. Disillusioned Finns responded by calling these air bombs “Molotov Bread Baskets.” As a response, the Finns decided to attack the advancing Soviet tanks with the same guerilla homemade, bottle bombs used in the Spanish Civil War. The nationalist Finnish forces perfected these bombs and sarcastically called them “Molotov Cocktails.” These cocktails were meant to serve as a “drink to go with the food” that the Soviets were serving.[iii]

This unique history as an agent of anti-Soviet resistance continued into the Hungarian Revolution of 1956. Again, the Molotov cocktail was central to the strategy of anti-Soviet forces. Molotov cocktails served as a source of empowerment, as a means for underfunded, revolutionary forces to make an impact against imposing Soviet tanks. As nationalists took gained temporary control of Bucharest, images of Hungarian nationalists hurling Molotov cocktails at the Stalinist, 32-ton tanks circulated around the globe.[iv] The success of the forces was short-lived, as the Red Army eventually crushed these small guerilla forces. Still, by the end of the uprising, anti-Soviet forces had destroyed about 400 Soviet tanks. It is estimated that Molotov cocktails were responsible for about three quarters of these destroyed tanks.[v] Here, the continues its history as an anti-Soviet form of guerilla warfare.

Though tanks are not the dominant form of warfare today, the story of the Molotov cocktail is far from over. According to a study published by the Journal of Peace Research, firebombs and Molotov cocktails are necessarily factors to consider when studying the impact of contemporary guerilla warfare and terrorism.[vi] Articles regarding the contemporary crisis in Ukraine reference the use of Molotov cocktails on local police forces. As seen in this biography, the decision to name an incendiary device a “Molotov Cocktail” invokes both a factual report and a history of anti-Soviet resistance. As part of a dramatized description of the Ukrainian landscape, the author of this particular article writes, “Thousands worked to rebuild the barricades, laboring through the icy smoke-filled night using anything that came to hand—tires, bricks, debris—while others in a nearby underground metro station set about making Molotov cocktails.”[vii] This contemporary mention of the Molotov cocktail blurs the lines between an appeal to sentimental guerilla history and factual reporting of acts of war and political unrest.

The explosive, guerilla history of the Molotov cocktail has garnered it a reputation extending beyond the physical battlefield. The phrase “Molotov Cocktail” has been idiomatically incorporated into English vocabulary, serving as a metaphor for events of unexpected volatility. For example, a recent New York Times book review used the expression “hit like a Molotov Cocktail” to describe the sudden emergence of an unexpectedly raunchy new theatre genre. A recent ESPN article about the surprising happenings of a cricket tournament called the attempt a “Molotov cocktail of brilliance and bloopers.”[viii] Here, the phrase Molotov cocktail invokes the object’s history as a source of volatile, unexpected power. Interestingly, this idiomatic appropriations detach the term from any context of Soviet history or Russian culture.

In a strange cultural twist, contemporary American video games also frequently fuse the Molotov cocktail’s history as a weapon of guerilla warfare and Soviet backdrop. The weapon is an option in many violent video games, such as Call of Duty and Grand Theft Auto.[ix] In games dealing with more domestic themes, such as car chases, etc., the object is simply seen as a force of guerilla warfare. More internationally focused games, such as Call of Duty: World at War, specifically appeal to the object’s Soviet history. For example, in Call of Duty: World at War, the “Molotov cocktail” is a special grenade, one that is found only throughout the Red Army Campaign. Here, we see the Molotov cocktail living on as a, uniquely Russian, object in American pop culture.

As a material object of anti-Soviet resistance, and continuing as a symbol of underdog volatility, the Molotov cocktail has taken on a life of its own since its inception. Though appropriated in English idiomatic speech and American pop culture, mentions of Molotov cocktails still invoke a specific Russian, specifically Soviet, history.