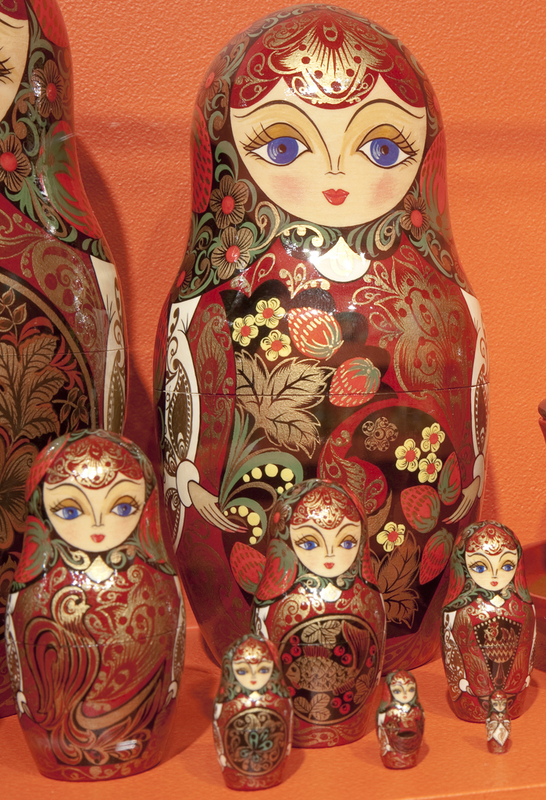 At the 1900 Exposition Universelle (World’s Fair), a new Russian invention was displayed for the first time to an international audience.[i] Today it seems strange to call this new toy an “invention,” because in the course a single century the matryoshka doll has become emblematic of Russian culture, a fixture of tourist souvenir shops and museum exhibits alike. Russian lacquer crafts, including matryoshka dolls and the closely related palekh boxes, have the warmth of folk crafts, seemingly remnants of a premodern Russia. The folk aesthetic of these painted crafts is given an ancient feel in part from the Byzantine-influence of Orthodox iconography and in part from the depiction of traditional Russian clothing, literature, and folklore; but as inventions of a modern age, these boxes are largely secular in content. Flourishing under Stalin-era reinvention of Russian national culture, Russian lacquer crafts were creations in a Tsarist age. In fact, it was from Japanese toys and boxes that Russian craftsmen took inspiration, so it is on a borrowed canvas that this new mythology of Russian folk culture is displayed.

What is is about these crafts that gave them such continuity from the 19th century’s romanticization of a premodern Russia to the 20th century Soviet modernization and cultural reinventions? The biography of Russian lacquer crafts is the story of an invented tradition, bridging both Russia’s relationship to the East and the Soviet relationship to the culture of pre-revolutionary Russia. Furthermore, as in the 1900 World Fair, this is a tradition invented to be seen from the outside, to capture foreign imaginations and build a unified mythology of Russian national identity.

From the 11th century, the Chinese produced nested boxes. By the 18th century artisans in both China and Japan were carving and painting the boxes to resemble dolls. It was on the Honshu island of Japan that artisans produced nesting wooden dolls depicting old men and Shinto deities. As Japan slowly opened to the Western world, these dolls were eventually carried to a toy shop called Children's Education, owned by Anatoly Mamontov.  What is held by some to be the first Matryoshka doll was created by Sergei Mailutin, an illustrator working in this shop, featuring an outer doll of a girl carrying a rooster with 7 additional dolls held inside it.[i] Anatoly Mamontov was the brother of S. I. Mamontov, a wealthy businessman and patron of the arts. From his estate in the Moscow region, S.I. Mamontov brought of different backgrounds, fostering the revival and invention of Russian traditional art.[ii]

B. Sergei Mailutin's Girl with Rooster

This Russian romanticism was not unique to Mamontov, but a prominent trend in the late Tsarist period, pushing back against the influence both of western European and of the industrial age. Look for instance to the village of Palekh, about 300 km northeast of Moscow, where the lacquer boxes known as Palekh boxes originated. In this village the peasants had painted icons for centuries, in the classic Orthodox style, but became famous for their craftsmanship in the 19th century revival of folk art. The artisanship of Palekh came into its own under Stalin, but even under Nicholas II, Palekh was a noted artistic center. As the art of Palekh, came into vogue in intelligentsia and bureaucratic circles, it became associated with Tsarist ideologies. The village  reshaped itself in the post-revolutionary period, but it could be argued that it was able to do so largely because it tethered itself to the image of more ancient Russian culture. In transcending its Asian roots and with the patronage of industrialists such as Mamontov, the same cultural mythology that bolstered a pre-revolutionary ideology would prove translatable for Soviet purposes.

Sergiev Posad, where the matryoshka doll exhibited at the 1900 World Fair was created, flourished in the 19th century as the center of Russian toy making  is a classic example of the reinvention of artisinal communities after the revolution. The art school that had once taught iconography in the style of byzantine religious art became the Workers' and Peasants' Red Army Artel.[i] In Palekh also, the artisinal community persisted, but it was not until the 1930's that the lacquer boxes became a cultural classic. It was in this period that the revolutionary backlash against material culture gave way to an elite culture that valued objects as elements of a Russian cultural narrative. Many of the boxes were decorated with cultural references that echoed the Russian revivalism of the 19th century, especially folkloric symbols such as the firebird and the troika. In the Stalinist program of culturization, this only further mythologized the secular folk aesthetic, anchoring modern Soviet culture in an ancient past.

Even as the palekh box was recreated as a Soviet classic, these lacquer paintings depicted idyllic images of peasant life in “old” Russia, standing apart from the glorification of urban life in the rapidly industrializing Soviet Union. Andrew Jenks quotes one artist in 1932 describing his work as depicting a Russia that doesn't “live in...gigantic stone boxes,...sleep in... identical holes, dress in … identical gray clothing … turn everything with a living spirit into a geometrical standard.”[ii] How is it  that this pro-peasant, anti-modernization vision could speak to an age  of development and industry?

At the heart of this tension between old and new Russia is the the dramatic changes in the Soviet way of life. As visual and political structure of both cities and rural areas changed so dramatically, could it be that there remained an unbroken narrative of “Russianness”?  A Palekh artist named G.M. Mel'nikov, also quoted by Jenks, wrote that “artists, drawing an image of a peasant from the old village and the image of a collective farmer of the new village, interpret them identically, simply by adding a few incidental details...”[iii] This unity between old and new social structures captures the role of folk art in binding a nation together across diverse cultural transformations. Look, for example to the family structure of many matryoshka dolls,  the outermost of which is often a mother and the innermost of which is often an infant.

This vantage – looking from the outside in – is perhaps the most revealing way to understand the role of Russian lacquer crafts. The invention of the Russian folk art created an entire Russian history, one of a single unified culture that is vaguely asiatic, vaguely byzantine, but primarily deeply drenched in the secular symbols of folklore. The importance of family structure, a focus of much of 19th century Russian literature, speaks not only to the personal family unit but also to the political family unit.[iv] If Russia is a mother figure, the multitude of her diverse components are contained within