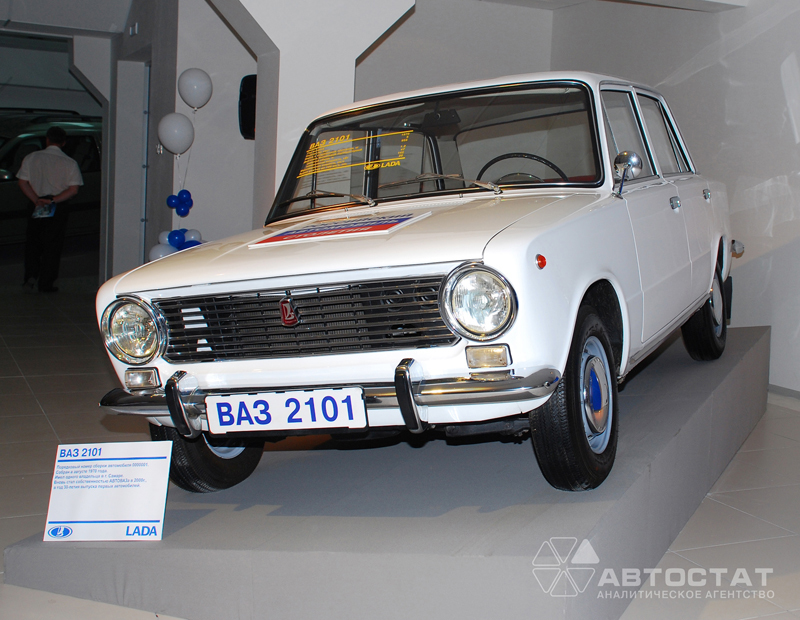 The Lada 2100 (“Zhiguli”), a brand of Soviet car, represented a mainstay of the Soviet economy, promoting industrialization in the latter half of the 20th century. A standard economy car, the Lada 2100 was first produced in 1970 following an agreement between Italian car-maker Fiat and the Soviet Union to promote economic ties which prompted the establishment of the Volva Automotive Plant. An offshoot of the AvtoVAZ company (known as “VAZ”), the site of the plant was located in Togliatti on the banks of the Volva River.[i]At first, the plant operated under the direct influence of Fiat; Giovanni Agnelli, the head of the Fiat company, provided information on the construction of the Fiat 124 to serve as the basis for the initial production of the Lada automobile. [ii] As a result, the car could not be sold globally until 1974, when the Fiat 124 was no longer on the market. However, within a few years time, “Lada” became the national Soviet brand as the sole distributor of affordable cars for Soviet citizens.

The “Zhiguli” was the first and only car available to the masses, which propelled its ever-growing popularity across the Soviet Union. [iii] The car was built and marketed to withstand the frigid climate for a low costin order to optimally attract buyers. In one sense, the car represented a modified version of the Fiat 124 adapted for the snowy terrain. However, unlike its Italian counterpart, the Lada 2100 was poorly built and inefficient, which resulted in frequent breakdowns. The car itself was equipped with a toolkit that could fix most problems, illustrating the fact that the company itself was aware of the model’s structural issues. [iv]  Although the Lada dominated the Soviet automobile market, exports to European and Latin American markets did not fare particularly well. Accordingly, in time, the reputation of “Zhiguli” cars fell, and they were relegated to the bottom of the global automobile lineup in the 1980s.

Although the Lada 2101 was the most affordable car on the market, the state of Soviet production did not allow for maximization of sales. The overwhelming desire for car purchasing in the 1960s prompted the government to institute strict measures to keep consumerism in check. [v] The prices were high compared to wages earned, such that many individuals could not afford a car. For example, in 1983, a state employee would have to save up his pay for 43 months in order to buy a Lada.[vi] In addition,  an up-front deposit  amounting to a quarter of the full price had to be made at the time of purchase, with the balance due following delivery. Yet, delivery often took up to several years. Supply severely lagged behind demand such that there were long waiting lists to purchase the new commercially available car. [vii] Moreover, for those individuals lucky enough to possess a “Zhiguli,” there was a shortage of parts and only a few service stations in operation, which created further problems. As a result, difficulties associated with car ownership dominated the Soviet landscape for several decades.

Nevertheless, the Soviet auto industry attempted to increase consumerism despite government restrictions. For example, updates to the original model, known as VAZ-2101, occurred over the next two decades in an attempt to address the identified defects, but the reputation of the Soviet vehicle remained dismal. Lada (VAZ) 2104, 2105, and 2107 were produced in the following decades, each possessing updated features of the original vehicle ,and,  together,  they formed the “Lada Classic” series. Newer models such as the Niva 4x4 (based on a partnership with GM) were produced even into the 2000s.  Yet, the Lada prototype ceased to be manufactured in 1988, while the others continued to be produced until 2012.[viii][ix]

The advent of the “Zhiguli” played a dominant role in Soviet industrialization. With the establishment of the Volga Automobile Factory in 1966,  mass car production began. As a result, the revitalization of Tolyatti occurred which conferred great benefit. A part of the town became designated as “Avtograd” (“Auto Town”) was designed by the well-known architect Boris Romanenko.[x] Workers recruited to help construct the factory remained in the area, and they received housing for their efforts, and, in some cases, a personal car. As such, the younger demographic of Tolyatti promoted the development of the city as a whole. At the same time, however, industrial growth also promoted illegal activity, primarily in the form of increased selling of unauthorized auto parts.[xi]Consequently, the disappearance of parts from the factory resulted in a shortage of spare parts needed for repairs. Mechanics took advantage of this situation by charging car owners upwards of ten times the market price to locate parts.[xii] As a result, the development of the car industry in the latter part of the 20th century exposed issues deeply rooted in Soviet society.

The marketing of the “Zhiguli” as the “people’s car” created a distinct Soviet identity. When these cars were first exported in 1974, they were marketed as “Lada” , but the original name, “Zhiguli” remained in the Soviet market. The distribution of these automobiles ushered in a new era, one of greater freedom and characterized by an inward, personal focus. Prior, the state of Soviet consumerism suffered due to the restrictions imposed by the government. Communist policies were not conducive to private car ownership in the population, because it was indicative of private wealth. Following World War II, however, Stalin sanctioned the production of the “Pobeda” and “Moskvich” for communal purchase.[xiii] However, the high cost of these automotive models, as well as their low rate of production, limited the number of buyers and deflated promises of economic gain. Nevertheless, the Brezhnev era reversed these policies and ushered in a period during which Soviet prosperity reached its height. Accordingly, the advent of industrialization, which included increased car production, initially catapulted the Soviet Union towards economic success, yet the economic situation as a result of communism reverted this initial triumph.